History of The Land Rover

History of The Land Rover

The land Rover in its many forms has been a staple of the British automotive landscape now since 1947. The founder of Land Rover, Maurice Wilks, built a prototype ‘Landy’ by using a chassis and various other components from a Jeep.

Officially the first true Land Rover came on to the market in April 1948, only a year after Wilks had begun tinkering. There are many things about the Land Rover that have become iconic and will perhaps always have a place in popular car culture. One such thing is the traditional green paintwork. It was an early and cost cutting choice by Wilks to use the army surplus cockpit paint that just happened to be green. Therefore, right from its early days of testing the Land Rover it has been synonymous with field use, ruggedness and military readiness.

As a true entity, Land Rover has existed since 1978, prior to this it was a faction of the Rover Company. Things stayed much the same until 2000 when Ford bought the company, later in 2008 the jaguar and land Rover companies were bought by Tata motors, the largest car manufacturer in India.

Throughout its history, Land Rover has produced a number of iconic models, such as the Freelander being introduced in 1997, the Discovery in 1989, and the Defender in 1983 (although not initially referred to as such).

In 1949, the British Military purchased a trial batch of Series I Land Rovers, and have used these and many others ever since.

For 67 years the land Rover defender in its many forms was produced at their Solihull factory, though sadly this came to an end on the 29th January 2016 after 68 years. Now Land Rover are running a project to restore these classic vehicles to their former glory after many years of wear, a fitting tribute to the tradition of the old workhorse’s near 7 decades of indefatigable ruggedness. 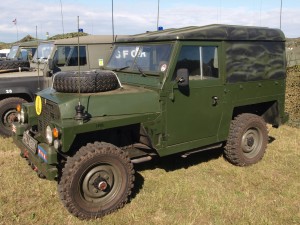